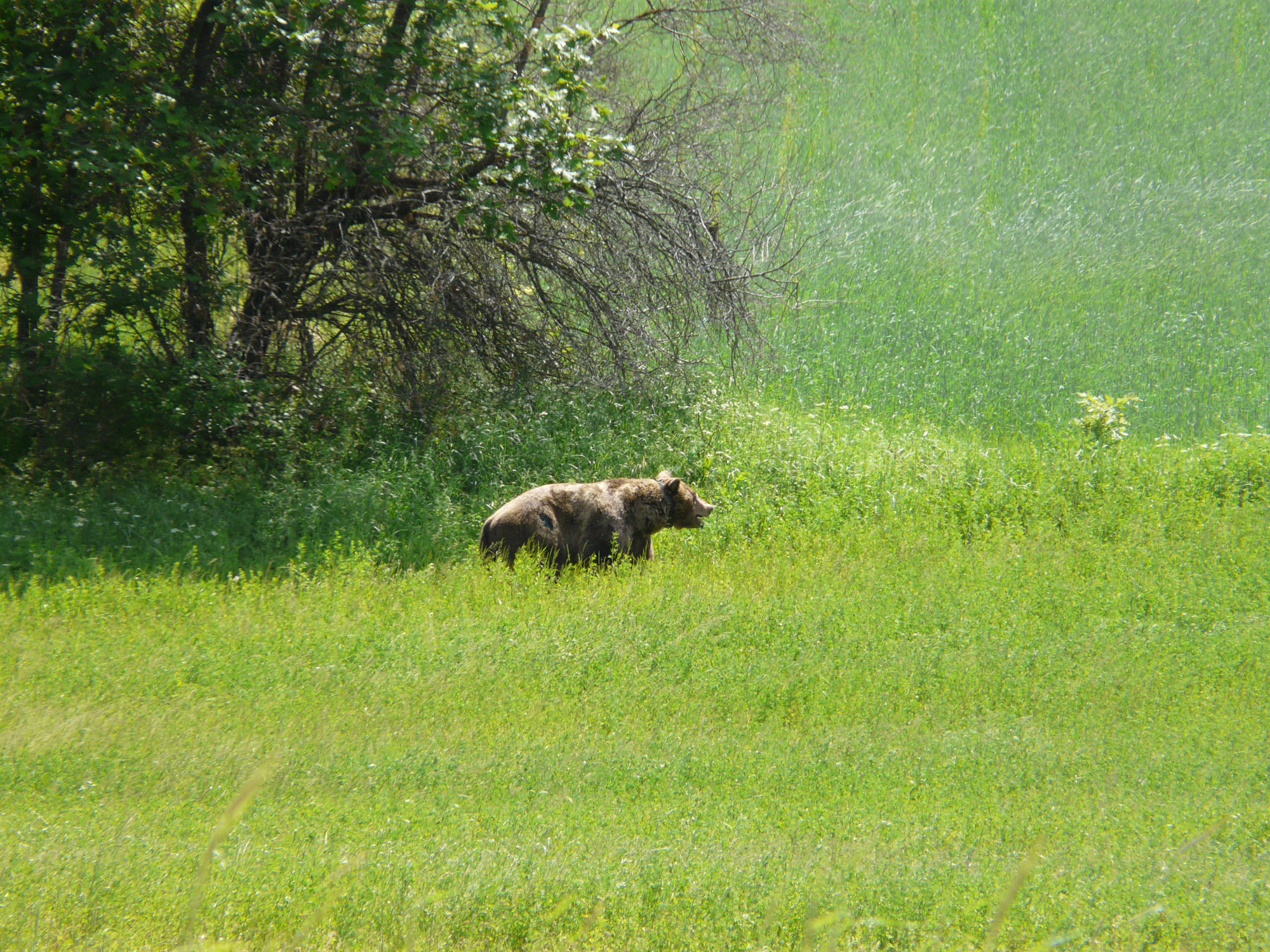 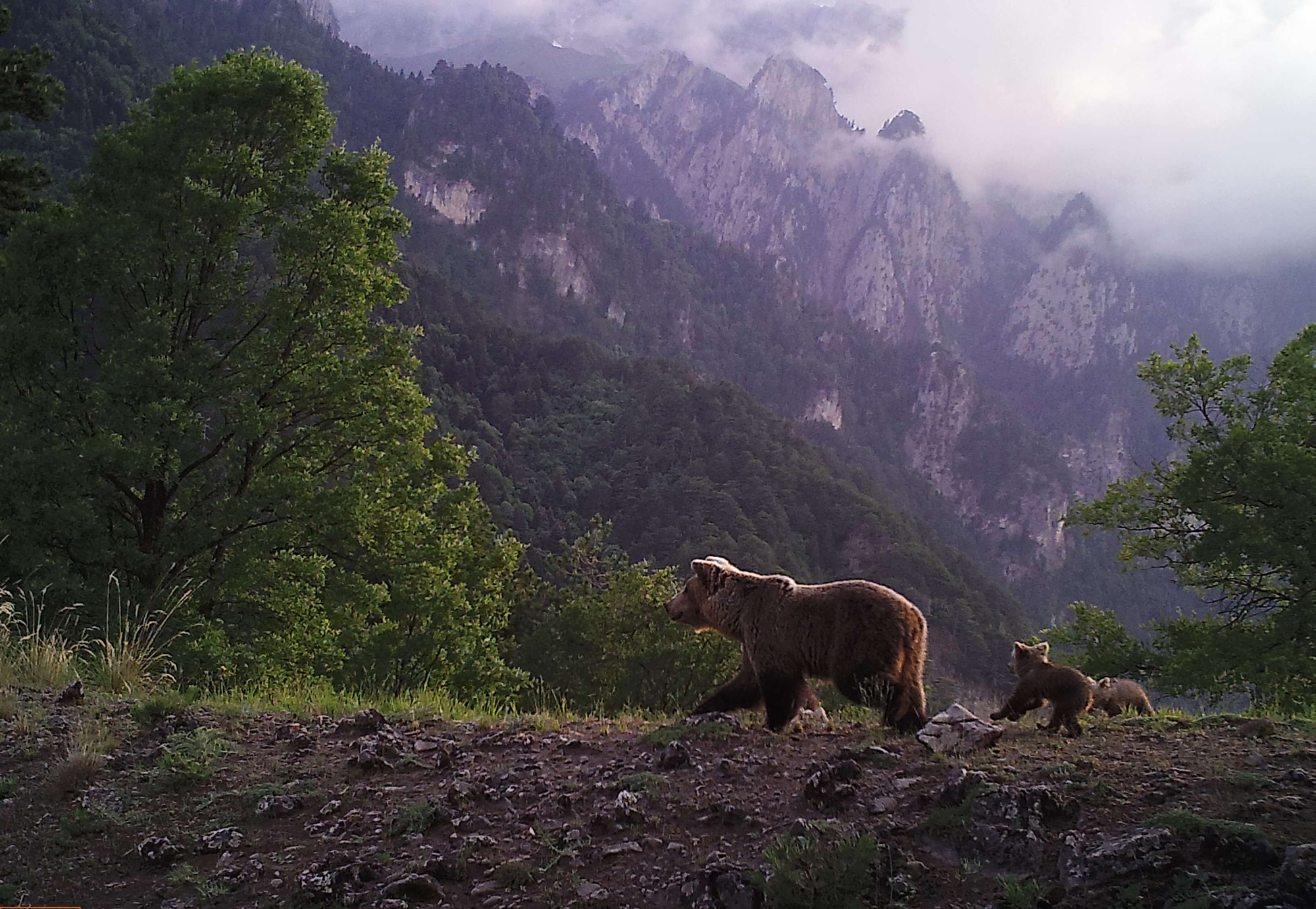 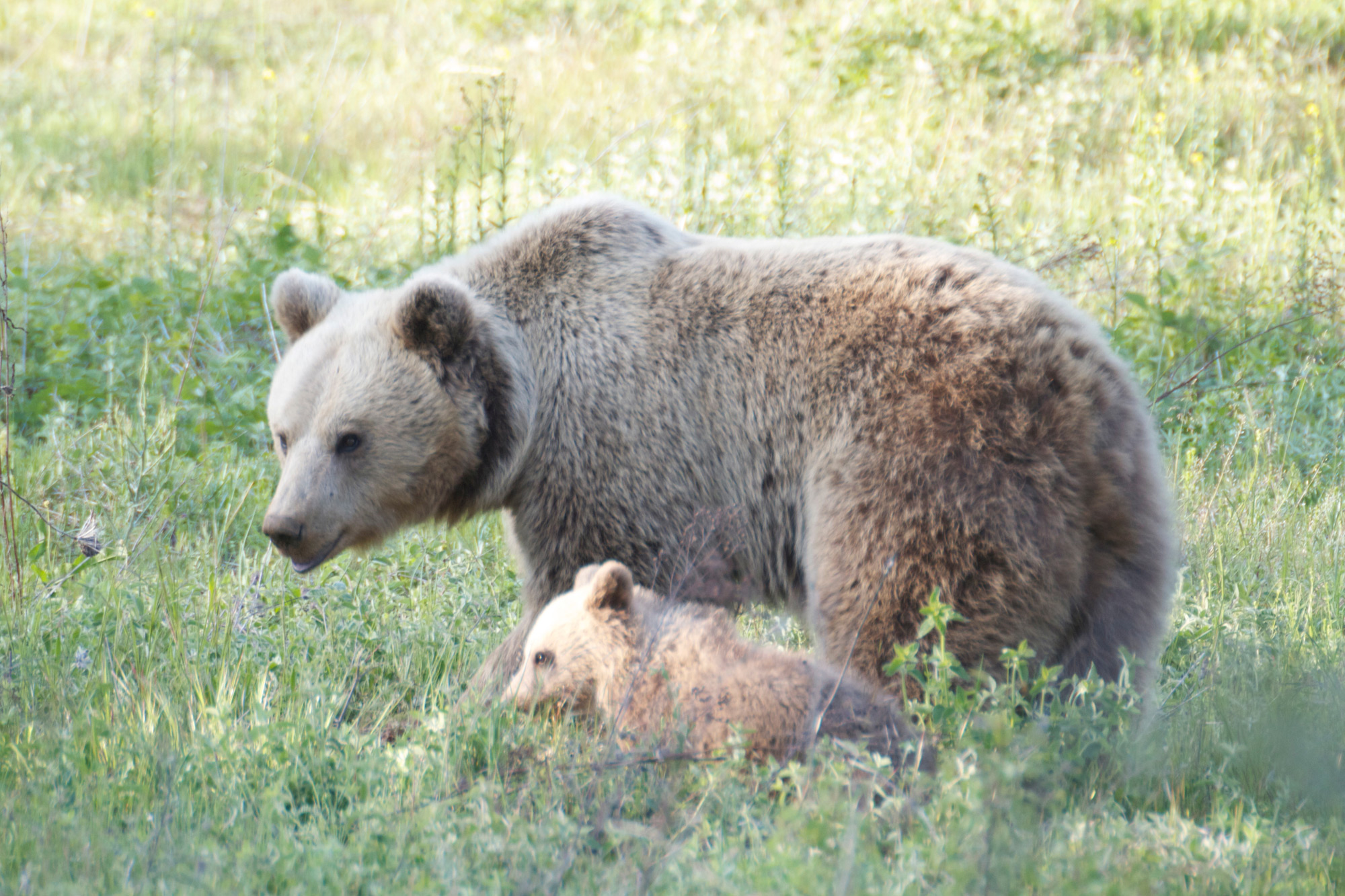 Habitat status:
Although total Ursus arctos* distribution covers large and continuous areas, both population nuclei are affected by either habitat disruption due to large infrastructure (mainly highways) or to inappropriate land use. In NPNP sub-area, the eastern border of the area targeted by the project, Ursus arctos* habitat has suffered from 2005 to 2009 severe degradation and disruption due to the construction of the Egnatia highway (Mertzanis 2009). In RMNP sub-area, the eastern part of the area will suffer from degradation due the current construction of another Egnatia highway stretch connecting Greece to Bulgaria. Additionally, small land ownership with farmland but also degraded oak forests due to over-exploitation, coupled to forest fires & over-logging are the most crucial factors of effective/potential Ursus arctos* habitat degradation in the sub-areas targeted by the project. Finally a recent large scale oil extraction international project is threatening a large part of NPNP area and related bear habitat with irreversible degradation and loss.

Overall known human caused mortality still affects the Ursus arctos* population with known losses reaching 202 individuals over a period from 1996 to 2018 (average of 10 losses/year). It also affects the minimum Ursus arctos* population in the targeted sub-areas with a total number of known losses at 89 individuals (nearly 45% of the total known cases) over the same period. Based on the fact that known human-caused bear mortality cases represent only the 1/3 of total cases (Servheen1994) it is obvious that both at a country scale and at the areas targeted by the project scale, human caused mortality rates (9% and 7.8% respectively) are still above the sustainable threshold of 4%. Bear-human conflicts are among the main reasons and incentives causing this problem. In the two sub-areas targeted by the project (NPNP and PNP) bears, as food opportunists, show pronounced seasonal feeding patterns connected to anthropogenic food resources. This fact increases the risk of bear-human interference and subsequently the human-caused bear mortality risk (illegal direct killing and poisoning).
Overall data on brown bear status in Greece over the last 15 years acquired through previous LIFE projects show that bear-human interference is becoming a rather pre-occupying and compromising issue. Three main factors seem to be at the origin of this phenomenon:
Positive trends in local bear sub-populations related either to previous successful conservation efforts in Greece or/and to an increase of reproductive success and litter size and survival rate in relation to food quality and availability. Expansion of the bear range into areas of species historical range (in Pindos population nucleus) (Mertzanis et al. 2009).
Habitat fragmentation, disturbance and barrier effect as well as the related side effects on bear spatial behavior and population connectivity, caused by transportation infrastructure construction. The newly constructed motorway (Egnatia Highway) and its related network, cut through some of the most important core bear habitat areas in the northern Pindos Mountains but also in Rodopi Mountain range including part of the sub-areas targeted by the project.
An increasing negligence and lack of management of anthropogenic food attractants such as: domestic garbage, refuse and waste which are chaotically dispersed in many sectors of the bear range but also in the sub-areas targeted by the project and which are at the origin of shaping a bear “habituated” or “problem” behavior.

In Greece:
Apart from being protected by the Habitats Directive (92/43/EEC, Annex II and IV as a priority species)
Ursus arctos* is characterized as totally protected under the National legislation. Namely the Forestry Code (s. 258, par.2e, 2z of LD 86/69 as amended by s. 7 of Act 1775/75) forbids the killing, capture, possession and exhibition of bears. However the aforementioned law-decree formerly empowered the Minister of Agriculture (and now by the Ministry of Environment) foresees the issue of selective derogations in cases of massive bear damage on livestock, beehives, crop and orchards. The latter jurisdiction has been transferred to the Regional Directors and the local Forestry Services, following the administrative changes towards decentralization brought about by Acts 2218 and 2240/1994 (on the basis of a previous Royal Decree 733/69 this jurisdiction was held by the chief of the prefecture). In practice derogation on the current total protection status (with the relevant permits issues) has been activated only once (in 1981). In response the financial compensation regulation was amended in 1997 by the Hellenic Agricultural Insurance organization (ELGA) covering all categories of bear damage (above certain established quotas i.e. for small livestock it has to be a value loss of 200€ or more) at 100% of their current market value.
Furthermore the target species has been officially ranked as “endangered” under the national Red Data Book (Mertzanis et al, 2009).