After repeated incursions in several villages to feed on barnyard animals, the Bear Emergency Team of the Majella National Park planned a specific intervention to capture F1.99, a problematic female bear better known as Peppina. The capture attempt, implemented in the frame of the Life ARCPROM, was successful and the she-bear is now equipped with a GPS radio-collar. Park biologists and veterinarians will now have the possibility to better monitor her movements but the collar itself will not prevent future incursions in henhouses, especially in this period of the year when bears are fattening to prepare for hibernation. Peppina, about 13 years old, 135 Kg weight, has been trapped the evening of November 17th in one of the villages of the Majella east side using a tube trap, lured with apples, set close to one of the henhouses visited the previous night.

“The capture and the radio-collar deployment – says the Park Acting Director -will give us the possibility to carefully monitor Peppina movements in this very important pre-hibernation period. We will also be able to better support people when she will visit villages and to better orientate the implementation of the deterring measures foreseen in the frame of the Life ARCPROM to prevent damages”.

Peppina, with her brand new radio-collar, is now back roaming in her home range and her woods.

g the conservation of the brown bear, a key species in Europe fauna. Co-financed with the LIFE Nature tool of the European Commission, the project involves 3 protected areas in Greece (North Pindos, Prespa and Rodopi) and the Majella National Park in Italy where the target species is the endemic subspecies Apennine brown bear. 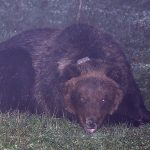 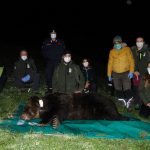 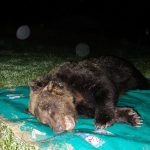 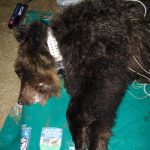 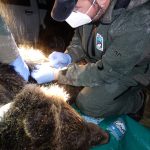 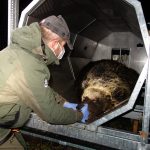 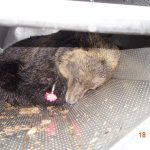