For about a month now, a young bear has been moving around and inside the village of Mikro Papigko in the area of ​​the North Pindos National Park. Recently, it has been visiting a home garden to feed on the roots of a particular plant species, without seeming to be disturbed by the presence of residents or of their dog’s. This behaviour of the animal is probably related to its young age and the relative inexperience in terms of anthropogenic dangers, but perhaps also to the new conditions that arose – even temporarily – from quarantine due to coronavirus and the reduction of human presence in the region.

The staff of the Management Agency of Northern Pindos National Park (PINDNP), has already informed the competent Forest Services about the incident, as well as the residents for the intention of its management. In particular, the possibility of conducting an operation to arrest and radiotagg the specific bear in the context of the LIFE ARCPROM Bear Emergency Team, in order to monitor its movements and take appropriate management measures to prevent it from approaching the village again.

The LIFE ARCPROM project aims to improve the coexistence of man and bear in three National Parks of Greece (Northern Pindos, Prespa, Rhodope Mountain range) and one in Italy (Majella). Partners of the project are the Management Bodies of the four National Parks, two universities (of Thessaly and Western Macedonia) and two environmental organisations (Callisto and WWF Italy). The bear approach to areas of human activity is one of the phenomena that the LIFE ARCPROM project is called upon to manage, always in collaboration with the Forest Service.

Apart from the cases that need special management by the Bear Emergency Team, human-bear interaction can be avoided by following the following general rules:

-Do not make any threatening move towards the animal with any object such as stones, branches, etc.

The photos were taken by Mr. Thomas Baltas, a permanent resident of Mikro Papigko, who sent them to ΡINDNP. 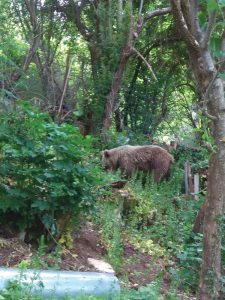 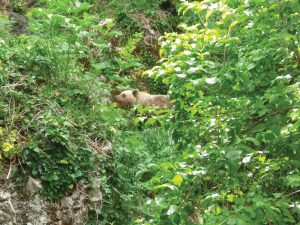