The kick-off meeting of the LIFE ARCPROM project (LIFE 18 NAT/GR/000768) with the title “Improving human-bear coexistence in 4 National Parks of South Europe” took place in Thessaloniki from 26 to 28 November 2019. All partners were properly represented at the meeting and more than 25 experts from Greece and Italy participated in order to discuss and plan the actions that are going to be implemented through the project with the aim to improve the human – brown bear coexistence conditions.

The project that is financed by the European Union’s LIFE Nature fund by 75%, will be implemented in four protected areas in Greece (Rhodope, Prespa and North Pindos National Parks) and Italy (Majella National Park in the Abruzzo region) with the participation of the competent management bodies.

Scientific documentation and support will be provided by the specialized scientific staff of the Veterinary Department of the University of Thessaly, WWF Italy as well as the environmental organization Callisto, which also has the responsibility of coordinating the project.

Finally, the development of the communication material and the visual identity of the project will be undertaken by the Department of Visual and Applied Arts of the University of Western Macedonia.

The five-year project officially began its implementation in October 2019 and will last until 2024. The main objectives include the development of innovative actions for the management of human-bear interaction, the prevention of large carnivores from approaching residential areas, to minimize illegal practices that have a horizontal impact on fauna and ecosystems, such as the use of poison baits, and the implementation of effective measures to prevent damage from large carnivores to agriculture economy. 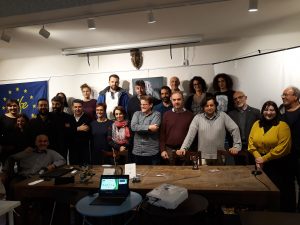